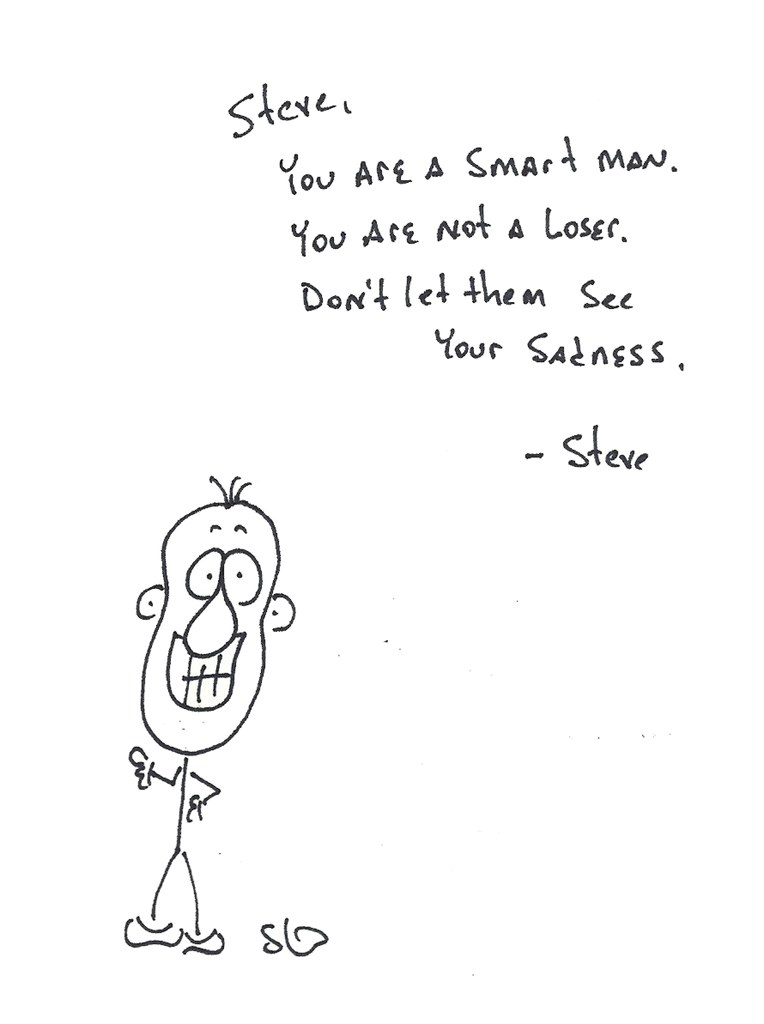 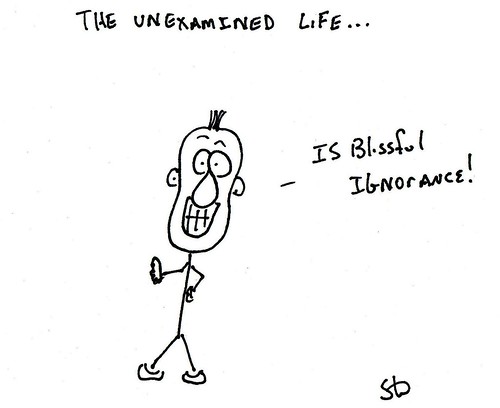 I watched the end of Bull Durham tonight. In the scene where Annie wakes up to find Crash has left for Asheville, she says a line in the voice-over narration, “The world is made for people who aren’t cursed with self awareness.” Hat tip to the Mrs. for then reminding me of this Gourdo from five years ago. It’s still true, by the way.

Thought I’d be earth conscious and recycle. I drew this almost five years ago but the philosophy behind the cartoon still holds. Coffee time is a magical time.

An Asshat On My Shoulder…

The is from late 2011 but is still an issue I deal with daily. My inner voice is such a debby-downer and is really causing a hit to my confidence. At this point, my self-worth is telling me I should be digging holes somewhere, and that skill is only marginal.

How do you deal with the asshat on your shoulder?

The Thing We Have To Fear…

‘They’ say you should face your fears. I think that is just a cruel joke ‘They’ are playing on us. ‘They’ watch from behind trees or around corners, giggling, as we try to look our fears in the eye and dissolve into a quivering pile of mush. Jerks.

As you can probably guess, I have an issue with phones. I turn into Peter Klaven – attempting to sound suave, cool and relaxed but actually being the exact opposite. Voice mail or live, it does not matter.

Really, isn’t it better to avoid all that humiliation (and pit stains) just for a smidgen of personal growth?

Received my first set of “cheaters” this week and, to my chagrin, found they do help in certain situations like when I am reading the paper at night. It is never pleasant when one is reminding of his mortality and impending doom. What’s next? Viagra? Reverse mortgage? A Hoveround?

I think I need a drink. And a hug.

There will be no more, no more…

Theodore Roosevelt said the above phrase during a speech to the Hamilton Club of Chicago on April 10, 1899 (the entire speech can be found here). The next line is, “In this life we get nothing save by effort.” I love it. It is also refreshing. The speech is called “The Strenuous Life” and applauds hard work and earning success and riches through that hard work. It hit me as particularly poignant as our culture celebrates being rich but does not celebrate the hard work that usually goes into achieving those riches. It is a culture of entitlement where people want to be rewarded for doing nothing other than looking good while acting outrageous (Kardashians and Jersey Shore anyone?) and actual hard work and those who earn their rewards are demonized and called unfair and unpatriotic.

Speaking of strenuous and hard, drawing a Gourdo-ized version of Theodore Roosevelt was driving me nuts until The Mrs. told me to draw him more like a walrus. Good advice. Thanks, honey!

(I first read this quote in an atricle by Charles Wheelan in the April 28-29, 2012 Wall Street Journal called “10 Things Your Commencement Speaker Won’t Tell You.” I highly recommend giving it a read.)

The Artist, the Scientist and the Industrialist Went Into A Bar…

I am green. So much so, I even recycle my old drawings when lacking inspiration for something new. I drew this in 2009 at the height of the vampire craze of True Blood, Twilight and a plethora of hangers on copy-cat fang banging shows and before the beginning of the Walking Dead and the new infatuation with all things zombies. I guess that means I am forward thinker; ahead of my time, on the cutting edge, etc.  A member of the advanced guard, if you will.

This is our family most mornings. We just kind of grunt and point until the coffee starts to flow and then we just grunt.

It’s the simple things, really. A pot of coffee. My own bathroom…